win any debate and
make decisions fast
with this argue to win technique
that works!

Use the power of Argue To Win For Internal Debates:

Argue to win is an article based on clear thinking and decision making. If you have ever struggled to make a choice and an internal conflict has ensued for many days with no resolution then this model of thinking may be the thing that can help, if this technique is used in conjunction with mindfulness techniques it can be a powerful force in decision resolution. We all get stuck at times especially with the most important decisions, we simply don't want to get the choice wrong. This can lead to high levels of conflict internally which then follows on to potential stress and frustration. The outcome being to present yourself to the outside world in a negative way.

Other impacts are the missing of deadlines that may be critical, or not being able to make that important step forward in life. This technique helps to understand how you can be in control of your thoughts and take control of the decisions you make. It is all about learning to manage your inner voice which makes you stronger when dealing with highly assertive people and makes you realise you can trust yourself in difficult circumstances. So how can we unlock the decision making process? By using the argue to win model! It will help you take control of those important decisions that must be made. 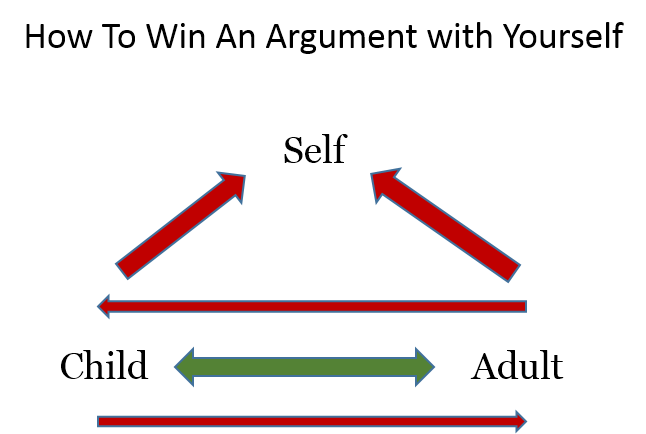 The model above shows how the potential to get stuck in decision making can happen. In the example we have used child and parent as the conflict instigators, this simply means one side of the argument and the other for example, the child could be, 'I want to go out tonight' and the parent is the, 'no you must stay in tonight’, both realistic thought processes that can happen. The green arrow line is the healthy exchange of debate between them and the red lines above and below is the friction that is caused by the debate. The red lines that point up to the self  are the important indicators within the model. These arrows pointing at the self show both the child and adult talking at the self, this shows that both sides have the capability to talk at the self when they choose. This leads to the individual losing the choice to decide and being over roared by either or both sides of the debate. No control mechanism is in place to instigate controlled, structured and paced communication, potentially leading to a complete locking up of the decision making process. 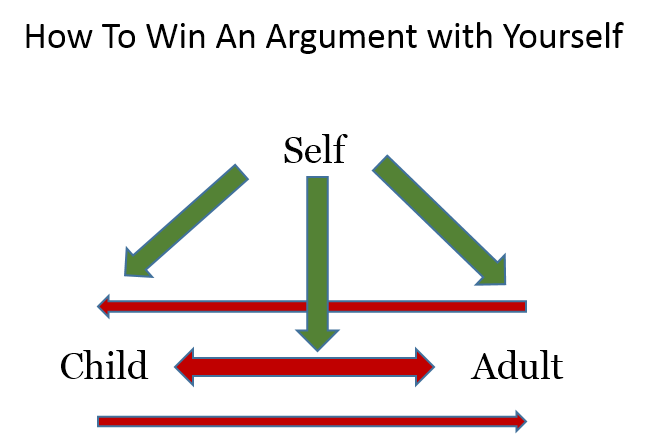 In the model shown above the win process is in place, a subtle but powerful change has taken place. The debate between the child and parent still exists but the self has now taken control. In this process the self which is the individuals higher thinking, the 'you' that thinks about all sorts of things in every moment of an awakened state has separated from the debate process and now has control as the moderator. No more talking at the self takes place. The higher self decides when to take an input from either side of the debate and is in total control of when any communication takes place. This allows for controlled structured and paced debate giving the opportunity for reflection and time to flirt with thoughts on any view given by the child or parent. This then allows for clear thinking and a far less stressful process to reach a decision.